The cleaning of an old painting

For some time,  I have been cleaning antique, old paintings. I bought a beautiful piece by Matthaus Schiestl,  made around 1913,  that could use some restoration and cleaning.  The painting had some “craquelure” , the breaking of the varnish into a pattern of  hair sized cracks. Next to this, the lacquer turned into a brown veil that “dulled” the image considerably. The painting looked dirty which lessened the the decorative value of this lovely painting. You can imagine this painting not looking to good contrasting with a white or very light wall in the background.

While very fine lines are caused by aging and can enrich a painting, wide craquelure, if not treated, can result in the deterioration of the painting. Wide and rounded craquelure has other causes then just time passing. The wide gaps allow moisture to penetrate the paint under the varnish where it will react and cause expanding of the paint. Of course, this process will not happen over night, this will take time. Schiestl’s painting did not suffer from problematic craquelure but the lacquer on this painting became very dark and had covered the painting under a brown veil. Removing this should greatly improve the colors as well as lessen the craquelure.

Next to the condition mentioned above, the painting had some minor scratch marks here and there. An excellent candidate for me to clean. It is a big painting, (83 x 70 cm) so I knew I was up for some late night hours and many, many, (actually a few thousand) Q-tips. With chemicals, I made two solvent gels, one with acetone and one with ethanol alcohol so I had an option to test which one worked best on what color. I started out with a little corner at the bottom of the painting. Both gels turned out quit well, although I liked the ethanol solvent best because this gel seemed somewhat more liquid when reacting with the lacquer, which made the removal of the old lacquer somewhat easier.

Some colors on the painting reacted when in contact with the solvent gels. I minimized the exposure time on those problem areas and neutralized afterwards with turpentine, but here and there was some paint lost.
These areas where later retouched with the appropriate colors. After the painting was stripped from its brown old varnish, I retouched the areas where some paint was lost as well as the spots where the paint was scratched.

These where firstly infilled with Gesso and after that, retouched with oil paint.  After an extensive drying period of the thinned oil-paint,  (several weeks) it was time for the painting to get a new layer of varnish.  I chose Windsor and Newton varnish, (with UV- filter and reversible if needed) This was applied it with a “Da Vinci” ultra soft lacquer brush. The removing of the old varnish took about 90 to 100 hours.

I used around 3000 Q-tips during this process and about a square meter of cotton cloth. Almost one liter of solvent-gel did the job of dissolving the old lacquer. 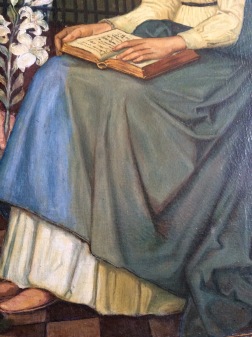 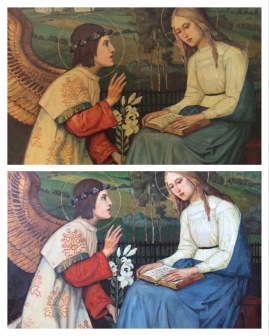 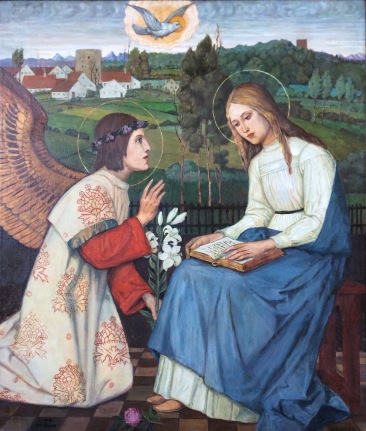 And voila! An explosion of color. Like it was made yesterday. More info about this painting, which is a remake of an existing work by Matthaus Schiestl, will be posted in the shop where it will be offered for sale.

It is for sale now on Etsy and via this blog:

Oh hail Mary by Emmer or Emner after M Schiestl